skip to main | skip to sidebar

'The Boscobel Tracts'... and 'Woodstock' - Fact vs Fiction


Spent today downloading and reading 'The Boscobel Tracts' - Edited by John Hughes - available on the Internet.   Value - has the stories of Charles escape, as dictated to Samuel Pepys by Charles, as well as letters recounting the episode written by those people directly involved, or their children, as well as discusses the locations.  Included in the Boscobel Tracts is the volume titled 'Boscobel' that was written by Thomas Blount, who died in 1679.  These are primary resources then, the King telling the story, several people telling their part of it in letters they were writing to Chancellor Hyde who was collecting them.  The stories are pretty consistant, but some give more details than others.


All of these people had to wait almost 10 years to tell the stories.  Charles and his family and supporters who were exiled after his escape realized that if the names of the people and the places where he had been helped were known to Cromwell and his governement, those people would have been severely punished or lost their lives - so the story could not be told.  Nine years later, after the Restoration in 1660, suddenly it was all right to tell the story, and Blount's book 'Boscobel' quickly became a 'best seller' of the day in the book shops.

In the preface of the Boscobel Tract, which was published in 1830, I found the author and someone he was writing to discussed Sir Walter Scotts' novel by the name of 'Woodstock' - which is Scott's fictionalized version of Charles' escape.  (see link below).   So I spent this evening reading 'Woodstock' on the Internet as well.  It was a bit surprising - but it has some scenes with Cromwell .  I have to admit when he first showed up walking into a room, I laughed with delight - the general himself shows up, not just some lackey!


The contrast between the 'factual events' as told by Charles himself and recorded in the Boscobel Tracts, compared to the fiction if Woodstock gave me a chance to see how different these two versions came out to be.   Scott fictionalized things to a terrible degree, even putting Charles far, far away from where he ever went - and by coincidence putting him at the place that after 1672, was Lord Rochester's home!  Overall though, I enjoyed the story, even though I did know how far away from the truth Scott had wandered.

I don't think I want to go that far off track myself - it was a bit distracting at times to realize how far, far, far away from the truth he went, but overall it was interesting.   The language was a bit hard to follow at times, but I seemed to get used to it after an hour or so and then didn't notice it.

An Internet image search for   'Charles II receiving the blessings of Henry Lee'   will bring up old mezzotint prints of what was an illustration in the book in 1830.  It was in interesting day's reading, to say the least!
*
* 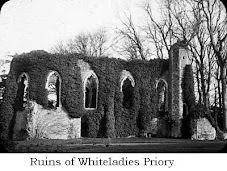 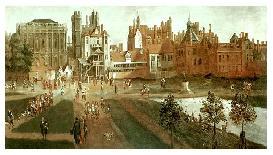 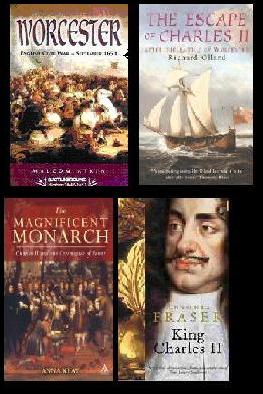